Strange it now seems that it bothered me how she would always dawdle behind while there was so much to see, and I’d never notice at the time that she was happy enough just watching me. Heading toward wherever I was, to end a searching in my arms that were never open.

I recall with fondness her poise and determined gait, and private strength of wherewithal that sometimes did take leave of its throne and put to helm a smile acting with not falsehood enough to cover over the deeper melancholy in her world, but a smile anyway. Amy disliked her pronounced calves and yet wore tights, no matter how thoroughly the Patagonian gusts would blow and yet often complained hilariously indignantly and unnecessarily of observed human errors of judgement and the like, long after the affray upon her dignity subsided and the offender, stooped and cloaking his villainy with shame had departed, sullen and regret addled. Amy’s relentlessness was tiring, to many if not all of them, but not to me. And often while they leered at her would I leer at them, more perplexed about them than disliking, for at last here was a little storm of transparency rare as the breathtaking within her berating into correctness or exhaustion a person failing, – that ushers away sun-shower pretensions with her brooding cloudburst veracity.

And I liked her calves too, looking furtively on their contours and contractions during the conquering of an incline. I said as much though little more, and it still seemed to matter immensely. I liked them best when ahead of me they brushed through grass and brambles on a hill-side meadow saturated by cold, dying daylight one December afternoon in some place, the name of which I can’t recall and made no effort to remember, by a highway remote in South America. You get tired of making plans and keeping notes. Abiding schedules and hitching your time and cares to duty and a whereabouts. We just walked, talked nonsense for once and wondered what were in the ovens of all the homes that blinked across the plains under perhaps the most magnificent dispersal of dusk cloud, the likes of which had never the skies before bestowed upon us we awed, in the end resigning to the fact that it was no different from any other as much as we were here with new eyes. Bursting apart with our pent-up hopes and anxieties, like the first Spring flowers through melting snow. Sometimes Amy would quietly look away and slump into a sigh that halted the planets in their cycles and cast suddenly over the hissing prairies of my heart a shadow crawling. Then, she would look back over her shoulder with a smile that betrayed an arrived at relief I knew only too well, and immediately a solitary lance of light shot out across the slopes from a source unknown yet knowing all. The Earth and all things resumed their movements and I could breathe again at ease, that all is indeed well, if she is well.
We were happy here with each other just as incomplete as ever, hidden in an interval of our lives and free to entertain the ecstasies of our wildest wonderings. I’m willing to wager, being years from these events that you will not have known a happiness like waking up face down on your cold tent floor without an air-mat, and with no shirt on in near-zero temperatures, with her cheek on your shoulder-blade and fingers clutching your lat because she loves your back even in her sleep, and her warm flesh against yours is keeping the world holy though she has three-fourths of the tent and all the sleep sack. You can hear the morning campfire and some of the group is awake and huddled around staring. The smell of instant coffee is utterly arresting and who knows what’s for breakfast or when it doesn’t matter. For a moment you forgot to remember that you can’t bear the thought of going home again, to describe so desperately these things that severely matter with people to whom they do not. It doesn’t even cross your mind that one day we would all be gone and that for many years before, we would all be looking back on these days from our separate and lonely corners of the world with a sad impossible longing to hold them all again and do absolutely nothing differently. You are too busy trying to recollect what it was that you were both laughing about so fervently before you fell asleep in each other’s arms with nothing and nowhere to be in the morning. 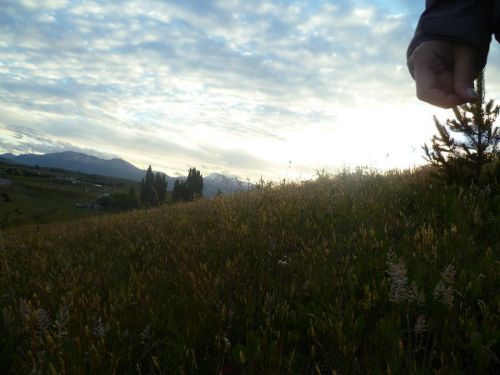